Kenya's comedy scene has unearthed a new star as 5-year-old TT comedian takes the country by storm. Terence as TT comedian is known came to the public limelight after a skit he was featured in went viral on social media.

Kenya's comedy scene has unearthed a new star after a 5-year-old TT comedian caught the attention of netizens on social media platforms.

Terence, known as TT comedian, came to the public limelight after a skit he was featured in went viral on social media. 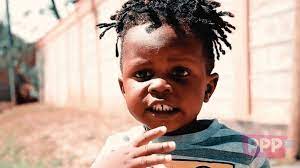 The video which has since hit over 3 million videos shows the budding comedian interacting with 'slay queens'.

TT tells the ladies to get jobs as he is a member of the "Stingy Men Association' and is on his way to pick his identity card.

He has since featured in 27 other videos cementing his place as Kenya's newest internet sensation.

TT comedian recently featured on the set of Jalang'o's online tv show with his mother who is also an actress.

When asked when he started acting, TT responds by saying he started while still in the mother's womb. The 5-year-old adds that the name TT Comedian was coined by his mother.

"I love acting with Omar. He is the one who teaches me how to act," TT says when asked if Omar tells him what to say.

Jalang'o also asked the comedian if he knew who slay queens are, seeing as two of his videos feature 'slay queens'.

Dubbed Kenya's answer to the Nigerian Emanuella, TT comedian manages to shoot three videos every week and has since accumulated 29 million views on his Youtube account.

The budding comedian juggles schoolwork and acting with his mother acting as his manager. Speaking to Jalang'o during the interview, TT Comedian's mother revealed the challenges faced with working with a 'child actor'.

She went on to add that TT knows the days he is supposed to shoot his skits and asks for his outfit prior to the day.

The young comedian is supported by a team of actors with scripts written by a director.