Over his illustrious political career, Odinga has had run-ins with several administrations leading to his arrest and detention on several instances.

Unlike today where the new Constitution has totally eliminated the issue of political detainment, in the 90s this was the order of the day. Anyone who criticised the regime was a candidate of victimization and torture.

Sometime back in the 90s, Raila was targeted for arrest but his allies got wind of the information and advised him to flee.

Considering that agents of the state were keenly watching his moves, Odinga relied on his close allies to help him get away from the country.

One of such persons was the retired Catholic Archbishop of Kisumu Zacchaeus Okoth. In his (Raila Odinga's) memoir dubbed An Enigma in Kenyan Politics, the former Prime Minister divulged that Archbishop Okoth dressed him as a Catholic priest and helped him escape to Uganda, after which he later moved to Norway, where he secured asylum. 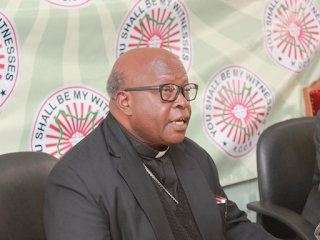 In this article, Nairobileo.co.ke delves dip into retired Archbishop Okoth's life and outlines some of the key happenings that have shaped it:

Born in July 1942, Archbishop Okoth officially started serving as a member of the clergy in November 1968, when he was ordained as a priest.

Archbishop Okoth retired in 2018 after serving for 50 years. During his tenure, Archbishop Okoth is credited with among others pushing for improved access to education, especially among girls.

Despite having an illustrious career and achieving a lot as a member of the clergy, it is his life after retirement that has made headlines and painted a picture of a man who is close to the Azimio presidential candidate.

In January 2020, he was named as one of the 14 members of the Building Bridges Initiative (BBI) steering committee. BBI was the product of the handshake between President Uhuru Kenyatta and Odinga.

In May 2022, he was named among a seven-member tasked with the duty of shortlisting potential candidates for the Azimio la Umoja running mate position. The position was eventually handed to Narc-Kenya leader Martha Karua.

These two appointments to high-end committees indicate that the Archbishop emeritus is among the people Odinga trusts as he has represented him in crucial roles.

With Odinga being one of the front-runners in the 2022 presidential election, some pundits believe that the Archbishop emeritus may secure a key slot in government should Odinga ascend to power.