Two senior GSU officers have denied stealing Ksh1.2 million and 2.57 Kgs of gold during a raid with KRA officers in Isebania, Migori County.

Two senior General Service Unit (GSU) police officers have been charged with assault and theft of Ksh1.2 million and 2.57 kilograms of gold in Isebania, Migori County.

The gold was valued at Ksh11 million.

The two appeared before Resident Magistrate Dorcas Mac’andere at the Kisii Law Courts on March 31, 2021, where they denied the charges.

Over 30 GSU officers from the two police stations had been caught on CCTV cameras assaulting five suspects when they raided an entertainment joint and a gold proceedings plant while accompanying officers from the Kenya Revenue Authority (KRA). 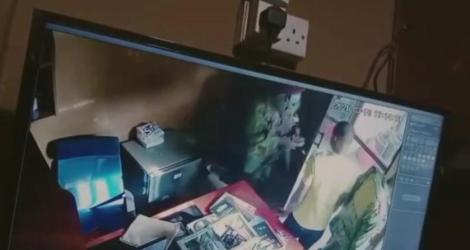 In the video seen by Nairobileo.co.ke, the officers can be seen ransacking one of the business offices.

“I received a call and I was informed that police had broken into my business establishment, however when three of my employees asked what was happening they were roughed up.

"It was only later that they claimed to be working with Kenya Revenue Authority Officers and that they were looking for certain documents," the business owner had said about the raid which occurred on Thursday, March 18.

Employees of the entertainment joint stated that the police stormed into the place and started assaulting them. They alleged that a number of them had ended up in hospital.

“They stole merchandise and money. We have CCTV footage showing officers stuffing money in their pockets. The operation was conducted by GSU officers.

"It was illegal since there was no court order that was brought here and showed to employees that these premises was supposed to be searched for any illegality,” the victim stated through his lawyer.

Three of the five suspects since identified as, Joseph Marwa, Mwita Mohammed and Dominic Kilonzo had been charged with possession of uncustomed goods.

On March 18, 2021, the three were charged at Isebania Town after they were found in possession of three drums each containing 50kgs of Sodium cyanide valued at Ksh 53,796.

The suspects' lawyer Mwita Kerario petitioned the court to allow for investigations by the Independent Police Oversight Authority (IPOA) into assault charges against the officers.

Justice Mac'Andere ruled that IPOA be allowed to conclude the investigations upon which its determinations shall be presented before the court.

He stated that the court should not be involved in the investigations.

She, however, noted that the assault charges would not stop the case from proceeding in court.