According to the Directorate of Criminal Investigations (DCI) the two were in a group of three, but one of them managed to escape with gunshot wounds.

The three according to detectives were planning an attack within the Embakasi area and have also been involved in stealing from mobile money outlets.

“The thugs were accosted by detectives in the nick of time as they finalized their plans to stage attacks within Embakasi, throwing their evil plans into disarray. Like cornered rats, the thugs who were initially three scattered into different directions shooting at the detectives frenziedly. But our men responded with precision, fatally wounding two of them on the spot as the third miscreant staged a daring escape into Mukuru kwa Njenga settlements. Determined to arrest him, detectives gave chase but the thug was lucky to jump into a sewer infested with human waste, his body riddled with gunshot injuries,” said DCI.

The sleuths recovered a pistol with 29 rounds of ammunition from one of the gangsters.

According to them, preliminary ballistic investigations revealed that it is the same fire that had been used in the murder of one Monica Katee who was shot five times in the Mukuru kwa Njenga slum. 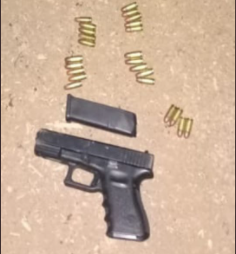 “Detectives recovered an Austrian made glock pistol and 29 live rounds of 9 mm callibre, from one of the fallen gangsters. After preliminary ballistic tests, it was established that the same firearm had been used to commit various robberies in the city, including the cold blooded murder of one Monica Katee, who was shot five times at Mukuru kwa Njenga, four days ago.”

“The thugs were also linked to the series of robberies that have been targeting mobile money lending outlets within Nairobi’s East-lands suburbs, with one of them named Kevin Maruga, being positively identified by some of the victims,” added DCI.

Detectives from the Buru Buru and Embakasi Police divisions were also part of the operation.