During his usual segment on Twitter dubbed #EngagTheIG, a tweep asked whether it was legal to record police officers who are either arresting or about to make an arrest.

"Hello Mr @IG_NPS, I've been wanting to ask this, is it wrong to record police officers who are either arresting or about to make an arrest? We've seen this in US and UK but in Kenya, they will always be inhuman in dealing with the recorder. Kindly clarify," the netizen posed.

The IG responded noting that it was not illegal but the recording should be 'objective'.

“It is not against the law to record objectively.#EngagTheIG,” Mutyambai stated.

Netizens questioned what 'objective' meant in the response while recording but the IG didn't respond.

A section of Kenyans suggested that while the IG said it was legal, some officers might harm you if they notice you're recording on phone. 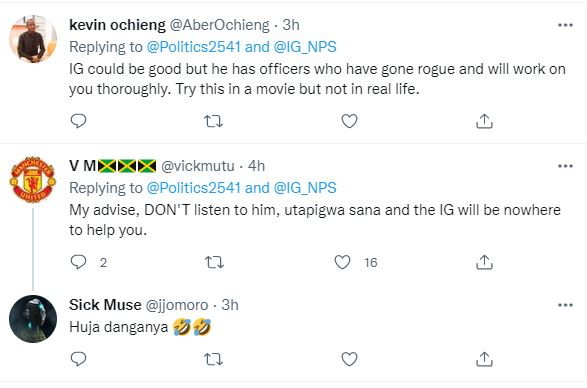 According to the 2017 report by World Internal Security and Police Index (WISPI), Kenya Police was ranked the third-worst in the world following a critical review of the four internal security domain-capacity, process, legitimacy, and outcomes.

The country has witnessed a rise in brutal killings and harassment over the years, including the Kianjokoma brothers.

However, the Director of Public Prosecutions Noordin Haji in October assured Kenyans that as much police brutality was on the rise, plans were in place to mitigate such cases that have marred Kenyans.

"Police excessive is not only in Kenya but globally thus, it depends with the mechanisms put in place.“The ODPP has been working closely with the UN, which has enabled us to charge 80 police officers involved in police excessive & they have been charging individuals on command responsibility,” Haji stated.