Kalonzo Gets Emotional as He Gives Update on Wife’s Health

Wiper party Leader Kalonzo Musyoka on Friday evening got emotional as he gave an update on his ailing wife Pauline Musyoka’s health.

While speaking to Citizen TV, Kalonzo said that his wife who has been sick for a long time is currently stable and they continue to pray for a miracle.

The former Vice President said that he misses his wife’s vitality as he seeks to become the fifth president of Kenya.

He went on to describe his wife as a mobilizer, adding that he misses that side of her.

Kalonzo however, noted that his wife has been following on every step he has been making politically. 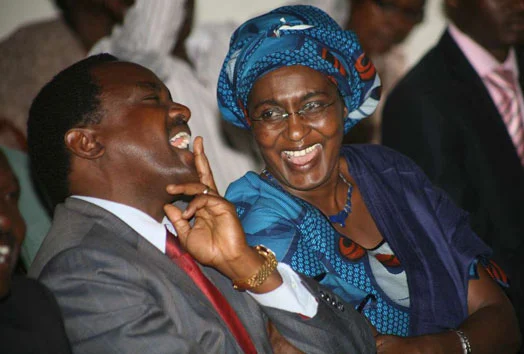 The Wiper leader mentioned that his wife knows that he must keep on fighting, which he termed as one way of helping in her recovery.

“Mama is stable, we thank God and we continue to pray for a miracle. Of course I lack her vitality… she is a mobilizer I miss that but she also follows and that’s why the delegates congress some two family members were there with me,” the former VP said.

“We keep on praying and she knows that I must keep on fighting. By fighting on I’m also assisting in her recovery,” he added.

Kalonzo’s wife has been battling an undisclosed illness for about six years now.