The Gatundu South lawmaker advised the former premier to retire from politics and give way to the newly formed coalition.

Gatundu South Member of Parliament Moses Kuria has weighed in on the new political formation that has Deputy President William Ruto, ANC leader Musalia Mudavadi and his FORD-Kenya counterpart Moses Wetangula in one camp.

In a statement on Wednesday, January 26, 2022, Kuria sent a message to ODM leader Raila Odinga following Ruto and Mudavadi's joint rally in Nakuru.

The Gatundu South lawmaker advised the former premier to retire from politics and give way to the newly formed coalition. 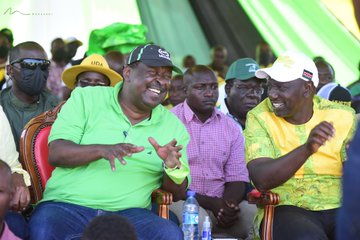 He stated that the "earthquake" movement had sent tremours in every part of the country, terming it the "new order".

"The tremors in the country are part of a revolution marking 30 years of our multi-party experiment. Old order must give way to new order. The gods have spoken.I advise my friend @RailaOdinga to give way to this revolution and retire with grace alongside Uhuru Kenyatta," Kuria stated.

The Gatundu South lawmaker, a longtime ally of Deputy President William Ruto, is away from the country on treatment.

Over the recent months, Kuria, a co-founder of the Mount Kenya Unity Forum (MKUF) had maintained that he would champion the interests of people from the Mt Kenya region. His political movements had appeared to distance himself from the DP.

However, his recent statement indicates that he is a firm believer and supporter of DP Ruto's presidential ambitions.

While responding to a fan who asked him to join the United Democratic Alliance (UDA), Kuria replied that he is a member of Chama Cha Kazi (CCK) and will remain so.