Nassir called out the second in command and leaders allied to him for accusing the former premier of sabotaging Kenya's economic growth.

Nassir called out the second in command and leaders allied to him for accusing the former premier of sabotaging Kenya's economic growth.

The aspiring Mombasa Governor argued that when Odinga was prime minister, he negotiated with China for a loan of Ksh2 billion, but when the Jubilee government took over, they went for more. 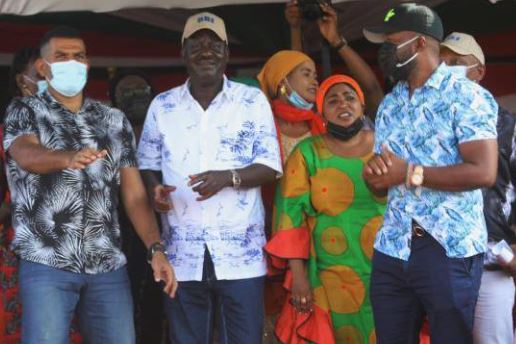 He challenged the Jubilee government to explain how the figure was ballooned to the unbearable debt that the country is struggling to repay.

The Mvita legislator dwelled on on the matter saying that the SGR policy that was installed by the Jubilee government should be reviewed to favor Kenyans.

He also recalled on the calls of Raila Odinga on the installation of the dry port at Naivasha, a struggle that was rejected by leaders including the Deputy President as he termed the Mombasa Governor Ali Hassan Joho an academic dwarf.

"Today there are leaders that speak while Ruto is behind them. I am sure that their bloods boil when they speak of certain things in the public. I wonder how you manage to tell those lies.

"There are others when we were negotiating on the dry port going to Naivasha, called Governor Joho an academic dwarf, that he did not go to school.

"He who said these words is William Samoei Ruto. You who campaign for him on matters SGR, turn back to him and ask him why the Jubilee government took loans that have no clear structures," Nassir stated.

"When Raila Odinga takes over the presidency, we will address all these SGR matters," he added.

Nassir proceeded to rally members of the public into voting for the former prime minister. He reminded Kenyans of the struggle Odinga underwent in the fight for democracy in Kenya.

"Today, there are people who can stand up and tell us that Raila Odinga is not worthy. Raila Amollo Odinga is the father of modern day devolution in Kenya. If he fought for our democracy, then we can believe in him to transform the country's economy," Nassir stated.

He called out DP William Ruto for being part of the problems that face the country today, and urged Kenyans to reject his candidature until he convinces the public enough on ehy he should be in State House.

Nassir was accompanied by Likoni MP Mishi Mboko who was said that the deputy president led the delegation that signed the SGR loan to Kenya, an issue that has greatly affected the economy.

She also called on Ruto to stop the complain as he is still in the government.

Kalonzo Denys Issuing Demand to Raila's Azimio, Urges Them to Join Him