Musalia Mudavadi will get the position of Prime Cabinet Secretary if Ruto wins the August 9, general elections and forms government.

With less than three months remaining until the next general polls, a power-sharing plan inside the Kenya Kwanza alliance has been revealed.

The power-sharing document was drawn by Tharaka Nithi Senator Prof. Kithure Kindiki before it was deposited with the Registrar of Political Parties on Sunday night to beat the deadline.

According to a report by Citizen TV, the presidential post and that of the deputy president have been reserved for William Ruto's UDA party. Whereas the running mate post has gone to the UDA, it is reported to have been categorically reserved for the Mt Kenya region.

The agreement has also reserved the post of The National Assembly Speaker to Bungoma Senator Moses Wetangula and his Ford Kenya party. Wetangula and Mudavadi have also been promised a 30% share of Ruto's government, that is appointments in all ministries and government parastatals.

The two Western Kenya leaders are in return, required to get Ruto 70% of the votes from the five counties of Western Kenya. 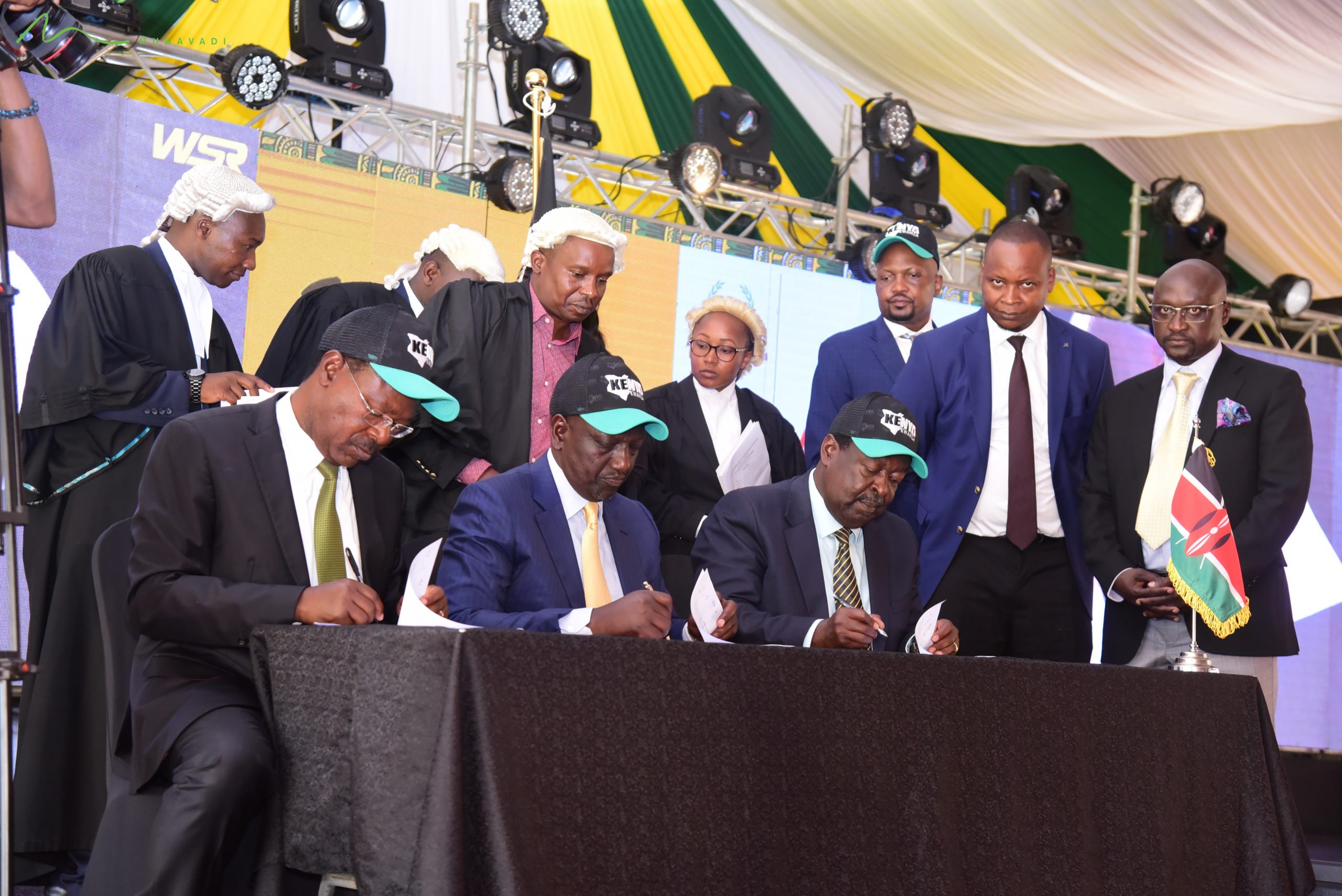 The new entrant into Kenya Kwanza Alliance, Kilifi Governor Amason Kingi, and his Pamoja African Alliance has been rewarded with the post of Senate speaker's seat.

Kingi's negotiations also saw a number of his supporters’ promised appointment to top management positions at the Kenya Ports Authority (KPA) by the KKA government.

Kingi is required to get William Ruto 50% of the 582,631 registered voters in Kilifi county in return.

On his part, Kingi's counterpart from Machakos Alfred Mutua’s Maendeleo Chap Chap party will be handed a Cabinet Secretary slot in Ruto's government. According to reports, Mutua has negotiated for a ministry of infrastructure or public utilities, such as the energy or water ministry.

However, all is not lost if Mutua will not get an appointment in the ministry. The second-term governor has been promised a nomination into either the National Assembly or Senate and backed to clinch the majority or minority leader in either of the Houses.

He has, however, been tasked with delivering 35% of the 1.7 million voters from the three Ukambani counties, Machakos, Makueni, and Kitui.

A number of small parties like Moses Kuria's Chama Cha Kazi, Mwangi Kiunjuri's TSP, and William Kabogo's Tujibebe Party have all been promised at least a post in the ministry and other government appointments.

To avoid a scenario witnessed between DP Ruto and his boss Uhuru Kenyatta, the coalition has also clearly spelled out the functions of the DP and the Prime Cabinet Secretary.

Deputy President will be tasked with chairing all the cabinet committees, overseeing the implementation of cabinet decisions, coordinating relations between the national and county governments, and coordinating planning and supervision of projects and programs funded by development partners among other duties

To realize this, Ruto's government will be planning to create the post of a Prime Cabinet Secretary, who will be appointed through an Executive order within 14 days of election into office.

Prime Cabinet Secretary will be tasked with assisting the president and deputy president in coordination and supervision of government ministries and state departments and overseeing the implementation of national government policies among other duties.

DP William Ruto's Challenge to the Church Ahead of August Polls

MP Tim Wanyonyi Narrates How Sadly He Found Himself on Wheelchair