Safaricom: How to Stop a SIM Swap Request that You Have Not Initiated

The telecommunication company has revealed how its customers can stop a SIM swap request they did not initiate.

Mobile network operator Safaricom on Monday detailed how its users can stop a SIM swap request that they have not initiated.

In a response to a tweep who had sought information on the process, the telecommunications giant stated that its customers can dial *100*100# to stop any SIM replacement process that they had not initiated.

The response comes amid cases of SIM card swap fraud that have led to Safaricom operators losing huge amounts of money.

In the latest case, a man lost Sh2.6 million after fraudsters emptied his bank accounts within hours through several M-Pesa transactions. 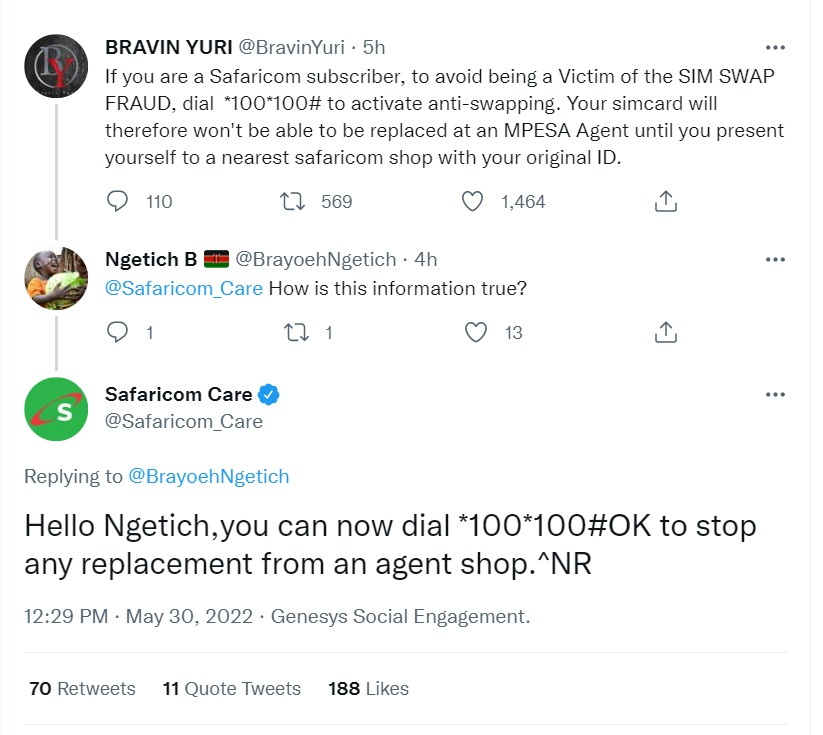 The man had received a SIM swap request text that he had not requested, and before he could take action, his accounts had been siphoned clean.

Safaricom stated on its website that SIM swap fraud is one of the cases of identity theft.

“Fraudsters go to the extent of registering an existing number on a new SIM card in order to intercept notifications, one-time passwords, online banking profile and transactions as well as changing the account security settings,” Safaricom stated.

The company urged its customers to ensure their SIM cards had active SIM locks to avoid falling prey to fraudsters.

It also asked the users to use strong passwords and keep personal information off social media.