DP Ruto Shows Up For BBI Report Launch At Bomas

Deputy President William Ruto is attending the formal launch of the Building Bridges Initiative (BBI) report at the Bomas of Kenya.

The Deputy President who has previously expressed reservations on the handling of the constitutional review process under BBI missed the presentation of the report to President Uhuru Kenyatta and African Envoy Raila Odinga at the Kisii State Lodge on Wednesday, October 21.

President Kenyatta is expected to lead more than 6,000 invited Kenyans at the Bomas of Kenya in launching the report on Monday, October 26.

Kenyatta was received by DP Ruto who had arrived at the venue at 10.20 am after the arrival of Odinga who is jointly spearheading the BBI process. 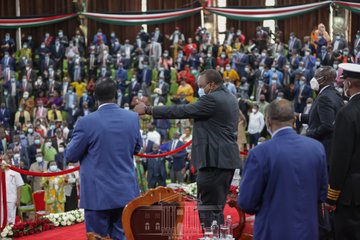 It remains unclear whether the DP will voice his support for the proposed reforms during the Bomas launch.

Dr Ruto is uncomfortable with the proposals for the establishment of an expanded Executive, complete with a Prime Minister, two deputies and the Leader of Opposition.

He has warned against what he described as an attempt to force the document to Kenyans.

The DP said: “This reggae bravado must stop because we need to an honest conversation that is all-inclusive in the country.”

BBI Launch at Bomas in Photos