The two leaders led and addressed rallies together at Kadongu area in Mwea, Kirinyaga County.

Kirnyaga Woman Representative Wangui Ngirici and Ministry of Interior Principal Secretary Karanja Kibicho have buried the hatchet ahead of the Mashujaa Day celebrations that will be held in Kirinyaga County.

The two leaders led and addressed rallies together at Kadongu area in Mwea, Kirinyaga County.

Ngirici was accompanied to the event by her husband and chief campaigner, billionaire businessman Andrew. 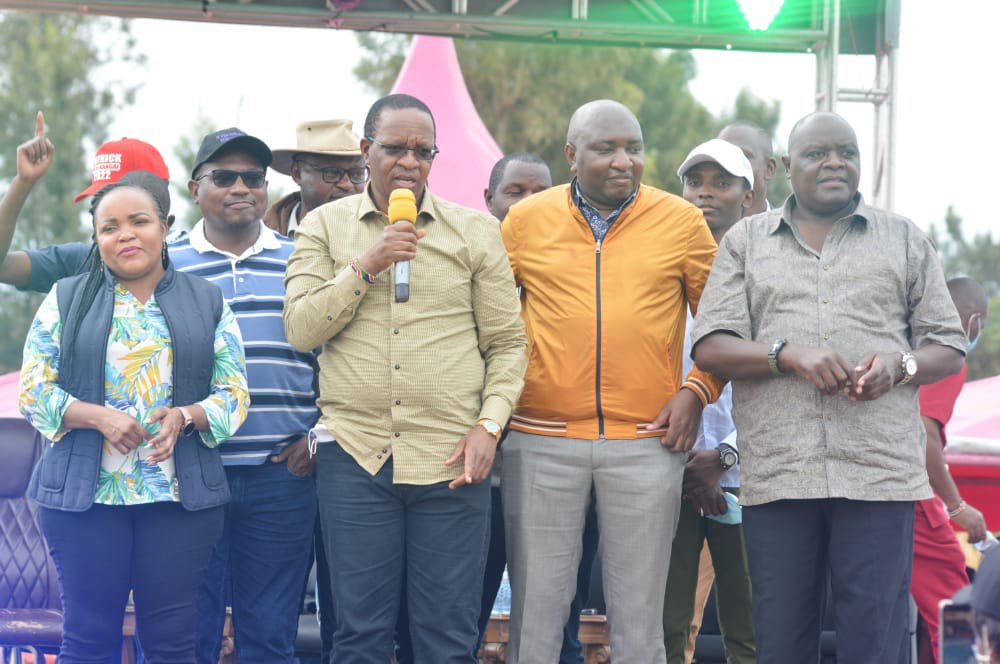 The Kirinyaga Woman Rep and PS Kibicho resolved the issues that have for a while separated them, agreeing to work together ahead of the upcoming national event.

"Yesterday PS, Dr Karanja Kibicho and I held a peace and unity rally in Kadongu, Mwea where we emphasized a great need of pulling together as Kirinyaga leaders for the benefits of our people," Ngirici stated.

The Interior CS, a close ally of President Uhuru Kenyatta and Ngirici an ally of Deputy President William Ruto, have long differed in political opinions.

"We also had a brief preparation breakdown ahead of Mashujaa Day which will be hosted in Kirinyaga. The people of Kirinyaga re-affirmed peace and unity before and after the national holiday," she said.

According to reports, Kibicho had intended to contest the Kirinyaga County gubernatorial seat in the 2022 general elections. Ngirici recently declared she will contest the seat as well.

However, a local daily, yesterday, September 10 reported that Kibicho revealed that he will not vie for any seat come 2022.

The meeting between between Ngirici and PS Kibicho appeared to have raffled the feathers at Governor Anne Waiguru's camp.

Taking to social media yesterday, Waiguru shared an image of the two leaders, then proceeded to question the agenda of the meeting yet there are other pressing issues around the country.

"Precisely!!! Mt Kenya News. Shouldn’t the priority be saving our people in Laikipia instead of early campaigns?" Governor Waiguru stated.

The Kirinyaga governor has recently expressed her fears regarding the popularity of the Jubilee Party, with which she was elected.

Speaking during an interview on Citizen TV on September 8, she admitted that defending her seat on a Jubilee Party ticket will prove to be an uphill task in 2022.

Ngirici has since dared her to decamp from Jubilee and join UDA where they will fairly compete for a nomination ticket.

Main Suspect in Murder of 3 Men in Kilifi Arrested