President Uhuru Kenyatta and ODM party leader Raila Odinga are expected to meet MPs and Senators to discuss the BBI report with DP Ruto and allies locked out of the meeting.

The National Assembly Majority Leader  Amos Kimunya weighed in on the matter yesterday stating that the process is aimed at familiarising the parliamentarians with the process.

“We have a team of experts who are here to explain to the MPs the BBI process, the contents of the report, and how it seeks to address areas identified as causing disunity in the country,” said Kimunya.

He continued that the focus now lies in trying to find a way to address challenges that have come up after a court nullified some 23 laws passed by Parliament.

The Kipipiri MP added that the experts will give a breakdown of the BBI report and how it has addressed the nine-point agenda, adding that all 416 MPs were invited.

“We extended invites to all the 416 MPs in both the Senate and National Assembly. For those who will not be able to make it for this retreat, we shall soon organize another session for them. The date shall, however, depend on the availability of the two principal leaders - Uhuru and Raila,” added Kimunya.

Kimunya's counterpart in the senate Samuel Poghisio expressed hope that a consensus will be reached on the document.

“We shall find a way to deal with leaders who are disgruntled with some of the proposals and reach a consensus on the document as it is,” said Poghisio. 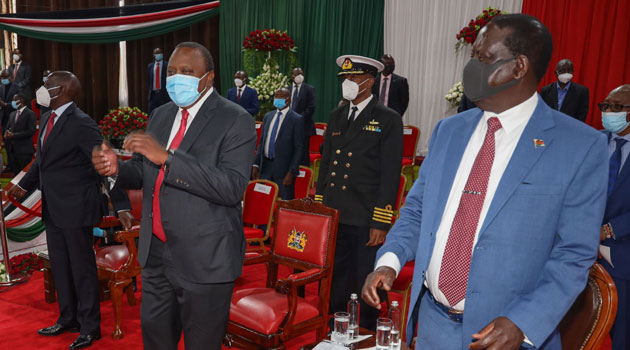 Some lawmakers allied to President Uhuru Kenyatta and ODM leader Raila Odinga made statements terming those who are opposed to the report as holding back the process.

“Concerns from people who ignored the BBI team when it was collecting views should not hold us back,” said Cheranganyi MP Joshua Kutuny.

Bungoma Senator Moses Wetangula had a different view calling on those who are opposed to the fine-tuning of the report as being conservatives.

“If there is no room for changing the document, why then are we here in Naivasha spending public resources? We need to be honest. If we can’t change it, why then not embark on implementing the document as it is,” said Wetang'ula.

“How do we devolve more resources to the counties and then weaken the oversight structure? We need strong mechanisms; strengthen ward reps and the Senate to ensure county resources are protected,” added Wetangula.

Other lawmakers like Homa Bay Senator Moses Kajwang' said the document should be fine-tuned and consensus created before subjecting it to a referendum.

Helb Says No To BBI Proposals On Student Loans