This is the first time the former premier is out in the public after testing positive for Covid-19 at the start of last month.

The Head of State took the former premier on a tour of the newly constructed Green Park Bus Terminus. 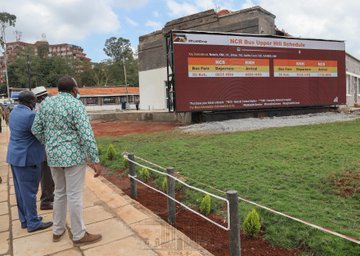 In a video seen by NairobiLeo.co.ke, the two leaders were guided through their tour by engineers of the project.

They engaged members of the public who were present at the terminus, with some of them chanting the ODM leader's name.

They were shown to the translucent waiting bays and informed by the engineers that a supermarket and health centre would be put up in the park.

"This will be a restaurant, will also have a supermarket, we are sourcing people who want to investment.

"We will have waiting rooms and the screen with information will be in this room. There will be a public address system like the airport," an engineer explained to the Head of State.

Businesspeople at the park expressed their gratitude to the Head of State, noting that the Nairobi Metropolitan Services (NMS) had offered them other sites to operate their businesses from, amid the construction.

Upon completion, the Green Park Terminus is expected to handle about 180,000 commuter vehicles on a daily basis.

President Kenyatta and Odinga were shown the new technology installed at the bus park, and would connect to passenger mobile phones to notify them when their rides are due.

The terminus was the first stop of their tour of various projects in the city.